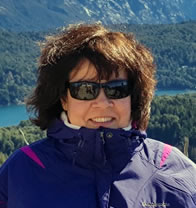 I was born and raised in Montevideo, Uruguay.  As any other person, through my childhood and teenage years I had quite unlikely dream jobs. At 15 I wanted to be a flight attendant; sadly, at the time that wasn’t an option for women below 170 cm tall. Later on, after graduating high school and becoming more and more interested in science and lab research, I wanted to be a CSI. Unfortunately, I was not able to enter the career for being a woman (that was still a thing! the good old times). In retrospective, it ended up being kind of lucky, as I got to study and work on a field I am truly passionate about.

I attended college at the School of Chemistry in the Universidad de la República del Uruguay, and after working for a while in the private sector, I got my degree in Chemical Engineering in 2004.

I joined the Academic Unit of Technological Management of the School of Chemistry where I started working in what would later be the research topic of my PhD, and also where I met my husband Mario. Throughout the years I became increasingly more fascinated with the wood decay process by fungi, so I oriented the subject of the PhD towards the effect of some metals on the fungal physiology. In 2005 I attended my first conference specifically on wood decay: the International Academy of Wood Science Meeting in Chile; I got to meet other researchers, some of whom I still work with to this day.

During this time I did internships at Universities in Venezuela, Brazil, and Chile.  During this time I learned wood microbiology with Dr Osvaldo Encinas, and about wood preservation products.  Their development has become the main focus of my work and research. I finished my PhD in 2010, and I continued working in the School of Chemistry until 2013.

Since then I live in Tacuarembó (a really quiet city in the north of my country) and work at the Sede Tacuarembó of the Universidad de la República, where I have my laboratory. I am responsible for an investigation and development group called Wood Deterioration and Preservation; it brings together 10 researchers and four research lines, some of which had never been developed in Uruguay. We also work with the private sector; the internal market is quite small, and although the forestry sector has increased in the last twenty years, the bigger companies work only for exportation. We also currently work with architects on wood construction.

Over time, our research group has associated with other groups of foreign universities, leading to joint research and exchanges; I was able to teach a Deterioration and Protection of Wood course in Universities of Mexico and Guatemala.

Along with Argentina (Lic. Damian Ghersovic), in 2016 we organized the 5to Encuentro de la Red  Iberoamericana de Protección en Madera (RIPMA), which was held in the historic city of Colonia del Sacramento.

In 2000 I married Mario on the day of his birthday, and later that year we had our daughter Tania. She is now in college (against all odds, studying history rather than science…) and she is living in Montevideo.

Mario and I live with our precious Labradors Zeus, Noa and their little puppy Vodka. There is dog hair everywhere in the house but they are the sweetest. I like to spend my free time reading and going to the cinema or the theater with Tania.  Given the current situation, for now we have settled for board games.

Maybe I didn't get to be a flight attendant, but I sure do travel every chance I get.  There’s nothing I love more than visiting new places, meeting new people and learning about their culture.